7.   Date of next meeting: to be arranged 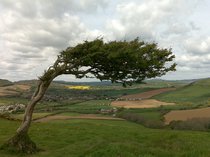 •    RJ followed up with Broomhills, and has received material, also reviewed by RT, confirming that 20% rainfall increase due to CC had been factored in to design of flood defences.

i.    Group will use information from our presentation to Steering Committee (SC), plus additional comments received, to complete “Issues tables” using Jo Witherden’s template, as follows:

ii.    As “Evidence” we should cite the range of existing documents already produced by recognised bodies in Dorset and elsewhere, including Local Plan, its Sustainability Assessment, various Strategies etc.
RT can guide people to what’s available.

Any evidence/issue identified by the Working Group to be put forward for inclusion in draft Plan
Need to consider impact of increased flooding on location and operation of sewage works and electric substations.

5.    Arrangements for Next Meeting

Raja is away from 11- 25th April , and will miss next SC meeting on 20th April. RT/MT will make sure CC is represented then. Next meeting as CCWG 12 noon Wednesday 4th May, at 67 Coronation Road again (thank you Margaret and Richard)